The Luminary Planned as West End’s Most Innovative Office Space 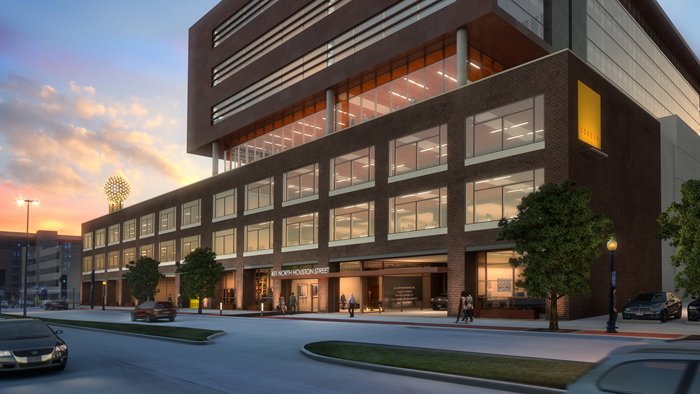 DALLAS, September 29, 2017 – Crescent Real Estate LLC (Crescent), in partnership with Long Wharf Capital LLC, announces the purchase and planned innovative expansion of Corgan’s headquarters and largest design services office located at the front of the vibrant West End District and on the edge of downtown and uptown Dallas. The existing and planned new building development will be known as The Luminary, billed by Crescent as a creative, amenity-rich office space designed to blend with the area’s “walkable” lifestyle of retail, entertainment and housing opportunities. The new seven-story expansion of the building will make it the tallest building in the West End and will feature a rooftop terrace.

“As the West End’s tallest building with high ceilings and efficient floor plate designs, The Luminary will offer dramatic views of the Historic West End District, Downtown and Uptown, and help foster a creative work environment, which is crucial to innovation,” said John Goff, chairman of Crescent.

“The purchase of Corgan’s office and development of more than 100,000 square feet of new office space on the front edge of the West End is a perfect opportunity for Crescent to continue tapping into the vitality of the West End,” Goff said.

Corgan, which has designed the new building, will leaseback the existing 58,591-square-foot, three-story building at 401 North Houston and lease 21,862 square feet of the new 102,315-square-foot office building to be developed adjacent to Corgan’s office.

In Corgan’s role as Architect for the original building and now its expansion, Corgan’s CEO Bob Morris provides an insider’s perspective about the building design. “Architecturally, the building is unique in the West End. It respects and connects itself to the historic district with its use of brick, exposed concrete structure and other elements. It then goes beyond that with a greater use of exterior glass, offering more daylight inside and better connecting its occupants to the outside as well as the larger fabric of the views of the West End.

“Corgan had considered many options,” Morris said about leasing back its existing building. “The qualities and character of the West End today told us this was where we wanted to stay, in a place that fits creative people like ours so very well in so many ways.”

Crescent and Long Wharf will offer the remaining 80,453 square feet as dynamic newly developed creative office space. Four DART light rail line stops are within a mile of the development with the closest station being only a five-minute walk from the building entrance. Apartments, restaurants, and attractions, including the developing Victory Park entertainment complex and the convention center, are also within walking distance.

The Luminary development embraces the current creative lifestyle and workplace convenience trend young employees find attractive. The main lobby will feature contemporary lounge seating and an interactive building directory, while the rooftop terrace with seating and catering areas will offer direct views of downtown Dallas. Additionally, the building will have 52 bicycle racks for customers and public use and shower facilities for use by office customers.

The new 102,315-square-foot office structure adjacent to Corgan’s office will include three stories of office space above a four-story parking podium. Each floor will have 26,817 square feet, and the new space will offer a generous 3.0/1000 parking ratio.

“The Luminary is a best-in-class creative workspace designed to inspire the building’s customers,” said Joseph Pitchford, the managing director with Crescent who will oversee the project. “Rooted at the front of Dallas’ Historic West End, we feel this contemporary design will lead the charge of the West End as the Innovation District.

“The loft-like space will provide customers a variety of contemporary, open office build-outs which will offer expansive views,” Pitchford said. Customers will have the opportunity to expose the concrete structural frame with 14-foot slab-to-slab heights, Pitchford added.

“The Luminary’s position as the tallest building at the front edge of the Historic West End District will offer customers unique views, and it has the latest technology and all the modern advantages that appeal to companies rethinking traditional office space,” said John Zogg, managing director with Crescent.

“As corporations focus on recruiting and retaining top young talent, customers across all industries embrace creative offices with flexible, open-office concepts, and in desirable, walkable locations. The Luminary, with its access to the West End, Uptown and Downtown, clearly fits the profile,” Zogg stated.

Crescent used its investment fund, GP Invitation Fund I, established in 2016, to fund the purchase of Corgan’s headquarters, the new building and the parking structure, all to be developed immediately adjacent to Corgan’s existing building.

“We have acquired over 2.5 million square feet of office space in the Dallas market over the past seven years, but this may be the most interesting and special project to date,” said Philip Murphy, Managing Director of Long Wharf. “The design, location, technology and overall amenities of this building are precisely what innovative tenants are looking for in today’s office building.”

This acquisition complements Crescent and Long Wharf’s 2015 and 2016 investments in the West End. Crescent and Long Wharf currently own 223,000 square feet of creative office space in the West End, having acquired attractive “brick and timber” properties at 208 N. Market, 501 Elm, 211 Record and 800 Jackson, all of which include office and ground-floor retail space and were constructed in the early 1900s.

Spread out over 36 blocks, the Historic West End District is a business hub for innovation, as well as a popular tourist and entertainment destination primarily comprised of repurposed early 1900s vintage shipping warehouses showcasing early 20th century architecture. Beginning in the 1980s, the “brick and timber” buildings were converted into boutique office buildings, attracting architecture and law firms, as well as creative office customers. Today, more than 300 businesses and agencies employ more than 10,500 people in 1.6 million square feet of available office inventory in the West End, according to Crescent.